2010 Flight Test Program
In preparation for flight testing the newly completed Cloudster, as well as my other models, I purchased a Walston Retrieval shown in the two cases below. 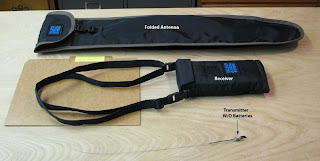 The antenna was connected to the receiver and batteries were put in the transmitter as shown below. After reading the instruction manual several times, I called Jim Walston at his home yesterday and he walked me through the Walston's tuning procedure. I did a little practicing on our street locating the transmitter with receiver.

I was little concerned with the joint where the flexible transmitter antenna is potted into the transmitter base shown below. To support this joint, a 2-gram transmitter/antenna holder was made out of one of Sue's old lipstick clear tubes and the yellow sheath of a Sullivan's Gold-N-Cable as shown below. Notice that a short piece of larger Ny Rod was also used. The Walston transmitter is a snug fit when it slides into the lipstick tube so the loop cord shown below was put on the end of the transmitter to pull it out with for installing the three batteries.

The complete 2-gram transmitter/antenna holder is shown below. The yellow sheath of a Sullivan's Gold-N-Cable provides stiffness to the small fine antenna for installation purposes. 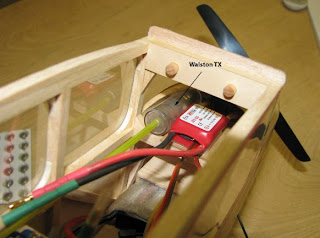 The yellow sheath containing the antenna was inserted into the Cloudster's fuselage and the Walston transmitter was slid in along the left side the JES 020 electronic speed control up front as shown below.

This is a view of the Walston installation through the Cloudster's windows on the left side. All in all, this worked out very well I think 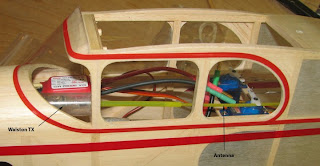 This morning around 10:00 a.m., Sue and I drove over to Veteran's Park again to conduct the maiden flight on the newly finished Cloudster 300 built for the Speed 400 electric event. We had a thunder storm blow through last evening depositing over an inch of rain, but in a relatively short time. This morning it was crisp, clear, and the temperature was only 80 degrees, somewhat cool for Texas this time of year. The wind was about 5 mph out of the south. The Cloudster's rudder and elevator controls were set up with reduced end points coupled with exponential deflections. After a thorough review and a radio range check, I set the throttle at about 1/3 and gently launched the Cloudster into the wind. It was a little out of trim as it climbed out, but I corrected that immediately and added a little more power. Climbing on up to about 150 feet, I did a few turns and cut the power at 1-minute and set up a glide. The wind wasn't bad at all and after some gliding turns and additional trimming, the Cloudster was gliding well. I came in for a landing.

The trims were examined and there was a fair amount left rudder trim in. I suspect I still have some wash out (TE Down) in the left wing requiring the left rudder trim. There was also a small amount down elevator trim in. I changed the rudder end points to provide considerable more rudder defection and I increased the elevator end points, but only a tad for a little more elevator deflection. Then I did another 1-minute motor run flight, starting off with partial power and then adding more power to get a little altitude. I stayed at a reasonable altitude and did not go up high. I worked on gliding flight with a few more turns to the left and to the right. The Cloudster was handling nicely so I landed and we came home. I removed the 1350 mAh Li-Po battery and charged it with the Triton charger. It only took a 413 mAh charge, but then I had not been flying on full throttle most of the time this morning.

All in all, it was successful Cloudster flight test. As Sue said, "At least you came home with it!" :O< I want to adjust my control end points a little more to provide better response, and I want to remove the wash out in the left wing's inner panel. Over the next few days I hope to fly the Cloudster a number of times getting much higher so I can assess the Cloudster's flight duration capability.................................Tandy
Posted by Tom Ryan at 2:33 PM

Please let me know price and you email address