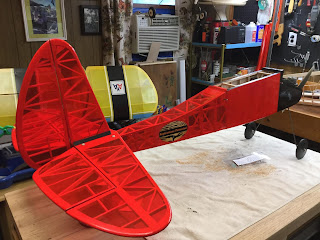 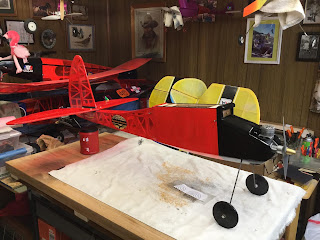 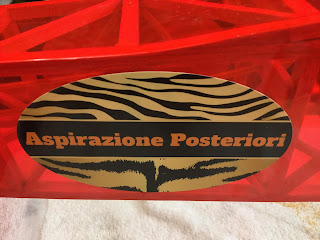 High temp here today in the 60's so I ran a MVVS 10 cc engine with the Davis diesel head. I do not think this engine was run before today. Tarno 1/2 A R/C carb and Aerodyne fuel. Uni-Flow fuel tank. First run the exhaust was brown. The rest of the runs were honey color. Much faster break in comparison to the old iron and steel diesels. Years ago, I asked Davis for a head for the MVVS 10 cc engine. He said loosen the head bolts and send him the engine which I did. It has sat in the box with the Davis head until today. I took the Tarno carb and Mike Salvador carb adapter from the MVVS I got from Bob Slater. The one from Bob Slater now has a MVVS .40-.45 R/C carb. Next time running diesels I will run Bob's engine with the .40-.45 carb. I have been told this will work as well as the Tarno for Texaco. Some folks have had problems with the Tarno carb. 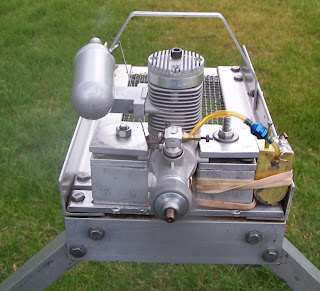 Zanonia refers to the seed capable of gliding great distances from its tree.  It was the inspiration for the wing planform of the early 20th Century Taube (dove) not birds as is commonly believed.

Last week I ran a Drone diesel.  Today I ran an MVVS 10 cc with a 1/2A R/C carb set up for Texaco.  Cloudy and cool, with high temp: 46 degrees.  No problem as diesels like cool weather.  I got this MVVS 10 cc diesel from Bob Slater after his health was failing.  For a couple years after flying in the SWR SAM contest  at Eloy I would spend some days at Bob's house running diesels.  We also flew models on the Indian reservation close to Bob's house.  Much nicer weather in Arizona in January than here in Northern Illinois.  One year it was the MVVS with a 1/2A carb and adapter for the carb made by Mike Salvador for Bob that we ran on Bob's test stand.  We could get very good engines runs with this set up around 20 minutes at the RPM that would fly a Bomber.

It took me some time yesterday in the garage locating the engine and other hardware to run this engine.  I could not find the clear plastic tubing extension for the muffler to dump the exhaust out the back of the test stand.  Also I could not find the push rod to control the carb with the handle on the test stand.  So, I had to make up a new push rod.  Looking for these items I did find something lost for years.  A brand new MVVS 10 cc with a Davis Diesel head.  See 2nd photo.  I sent the engine with the head bolts loose per Bob Davis to get him to make the head.  Some folks have had a contra piston on the MVVS drop and I wanted this head just in case.  The grass is starting to green up as seen in  the photo 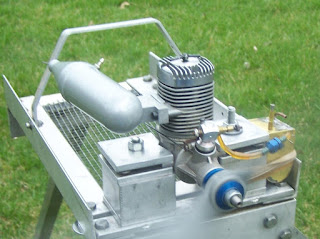 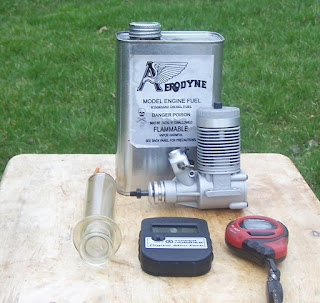 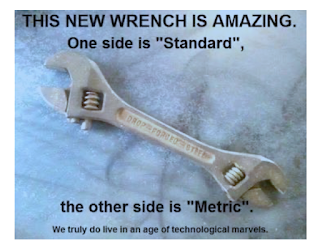