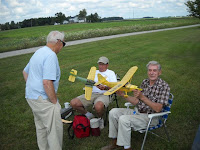 Hi Guys,
Two nice days at the Shelby Airport.
Attendees on the 13th: Jim Keppler, Cliff Riedel, Ted Williams, Tom Ryan, & Bucky
Attendees on the 14th: Gil Morris, Ted Williams, Joan Walter & hubby Bucky.
The corn fields took its toll. Cliff's towline glider after one beautiful flight. Ted's CO2 model. Tom Ryan's delta wing rubber job.
Gil was making adjustments on the model he flew in the world FAI Contest. Gil did not win, but what a whale of time and honor to attend and fly for the USA. Gil had quite a few stories he told about the contest. My wife Joan was all ears.
Jim Keppler made a great flight two minute flight with his California Champ. It stay on the field and out of the corn field. Any flight which stays out of the corn field is a very great flight. You have to wait for the right wind direction and use a very short fuse for the DT. Also hope you don't hit a thermal.
The two Earl Stahl models were built by Bucky. Bucky gave them to Jim Keppler to fly at the FAC contest. Bucky does not chase after rubber models anymore. Neither does Jim, but he can get the younger guys to fly the models and chase them.
The two gas jobs are an Ascender and a Brooklyn Dodger.
Enjoy the photos,
Bucky 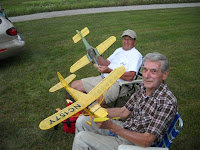 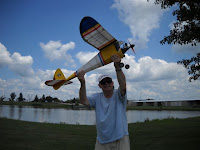 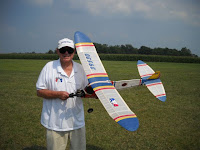 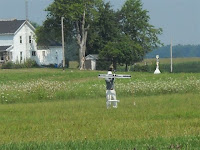 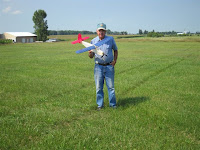 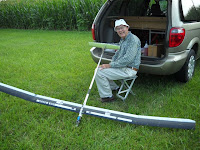 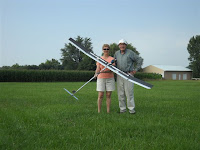