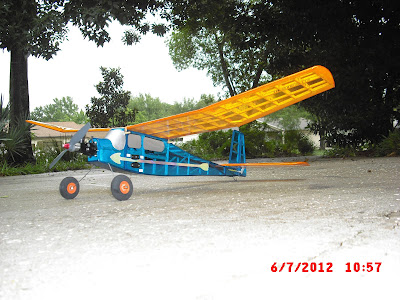 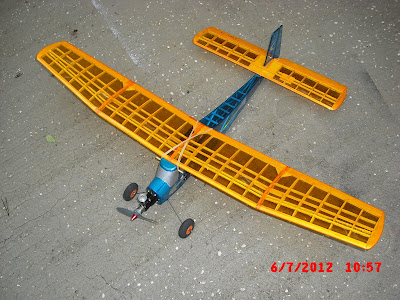 While browsing through my file of old plans I happened upon the plan for the Comanche, a model designed by Joe Wagner in 1951 for Veco Models. Joe designed the Comanche as a dual purpose model: free flight and PAA Load. It featured a fuse operated pop-up tail as a dethermalizer. Then nostalgia gripped me: should I build an R/C version of the Comanche like my old free flight of the early 1950s? With some hesitation I unfolded the old plan and it all came back, those free flight days with pals flying at the old Henderson Field. Oh, Henderson Field is just north of Tampa. It is where the Martin B-26 Marauders trained. Today the place is called Bush Gardens. Well that’s it; I am going to build the Comanche. That Indian name Comanche. Joe Wagner named several models after Indian tribes. The Dakota, a little all balsa biplane, it too I made back in those days. Joe inquired in a 1980s model magazine if anyone had R/Ced his Dakota back in the 50s. I sent him a photo of a much younger me holding my escapement operated R/C Dakota. He also designed the Sioux another high wing model. Yes, I built a Sioux back then. After losing it without a DT and having it returned wet from the swamp by a hunter, I decided to install a fuse operated parachute DT. This worked beautifully for a while. I took is to Ft McClellan, AL where it flew away in a thermal pulling a deployed parachute and all! Back to the new Comanche: I had to add structure to the model to make it strong enough to stand the rigors of R/C; it is ready to fly; incidence checked, balance checked, range checked, etc. I am writing this epistle ‘cause it’s been raining for days and I have nothing better to do. Can’t fly!