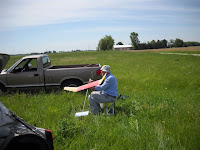 I arrived at the airport this morning in time to retrieve Gil's
1/2A AMA ship, a model he designed called the Pop-up powered
by a Russian Profi engine. 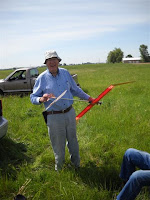 The model failed to DT and landed on the asphalt runway. Upon examination, we noted that the DT fuse burnt through the core but the outside (and the rubber band) was intact.
Gil Morris launching his Pop-up on its fly away flight 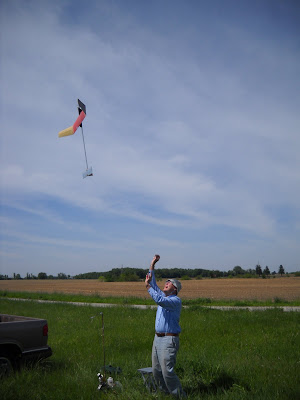 Dumb luck or bad fuse? Unfortunately, it was probably the latter because next time, the thermals decided to play for keeps. We watched it fly away in relatively calm conditions. I was the last to lose sight of it at 37 minutes. We then pursued by car. For nearly two more hours we tracked it 5 miles to the east, 3 miles south and then another 8-9 miles back west. It was apparent that the model was still airborne but was not in sight and it's anyone's guess how high it went. (I've hit large bugs in a jet >30,000 ft up and I know they didn't get up that high themselves.)

We must have been a strange sight; an octogenarian pointing a strange device at the sky followed closely from behind by someone who would pick him up every tenth of a mile or so. One old lady abandoned her gardening to come over and express her concern when we passed the entrance to her driveway. "I've been out all morning and haven't seen anything--- This is the first time I've seen anyone doing what you're doing." I explained that he had been flying models competitively around the world since the forties and she left with the assurance that we were harmless and wished us luck.
When we were about the give up, the target quit moving and pointing the antenna up in the sky didn't make the Walston beep. I parked along the side of the road and saw Gil emerge from the woods 200yds away. It was found but still lost. To wit, it was in a tree! At least fifty feet above the ground and that's where it stayed when we left Shelby hoping winds would come in the next day or two and we could return to pick it up. 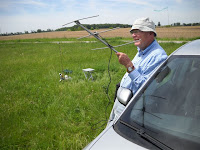 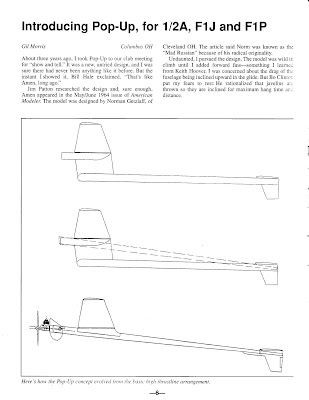 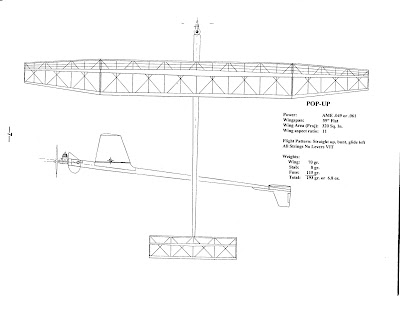 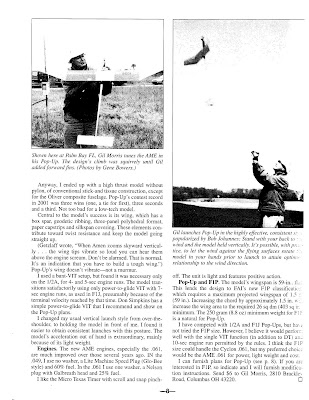 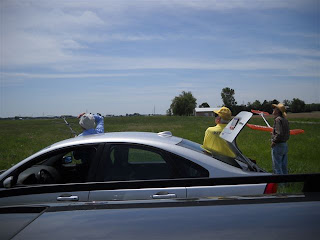 May 22nd update from Gilbert Morris

I went to Shelby late yesterday expecting the model to be down but it wasn't. It's hung up on the nose and on the tail end and neither will let go despite winds of 18 mph. I sat and just looked at it in the woods from 5:00 pm to 6:30 and then went in town for dinner and then checked again at 8:00 pm. It just sways with the branches in the wind. It's probably going to need a really strong gust. There's no strong winds in the forecast so I'm not going back up again until I get back from Lost Hills a week from Tuesday. Incidentally, the stab is DTed now.

At first, when I went in the woods, I couldn't find it in the branches nor anywhere else so went I back to the car and got the tracker and again spotted it in the same old place. It didn't rain up there but it's expected this evening. More fun!

Fuselage and stab were directly below where it had been but the wing was hidden in the undergrowth about 80 ft away. I had almost given up looking for it because of the mosquitoes. As I was about to pull away, the woods owner dropped by wanting to know why we had been going into his woods. He understood and was a bit surprised after I explained. He took it well but I didn't tell him the next step, had there been one, would have been the chain saw. Minimal damage. Transmitter good as new (batteries dead), engine okay but wing and stab waterlogged. I'm not sure it didn't come down before the big storm. All rubber bands were broken and even the fuel line rubber was badly deteriorated and I'll bet the wing rubber bands broke before the storm. The fuse had burned out in the core and never got to the RB. Anyways, all's well that ends well.