A total of 77 classic designs are illustrated, from the 1934 Miss Philadelphia by Maxwell Bassett through to the 1963 Viking FAI by Carl Goldberg.

Since general interest in Old Timer models has sustained at a high level for well over a decade, it seemed timely to work up a chart showing many of the famous F/F designs of the past 40 years. The results shown here, while fairly comprehensive, are not intended to be the ultimate "word" on the subject. Some of the dates are approximate, but in the case of published construction articles, publication date is given. A general chronological order is followed, but some profiles were juggled around to fit the layout better. All the profiles are to a common scale. The wing span figure is for the "flat" or plan size, (before dihedral) and length is for the fuselage only, excluding the prop.

This project has been a labor of love, as the time spent in research, collecting data and proportioning the profiles to a common scale just got out of hand entirely (these charts were intended to be printed in 1963, but...). In a way, it has been fun. Ukie and R/C flying may come and go, but free-flight is forever!

The profiles show quite graphically how free-flight designers became quite sophisticated "early on". See Leo Weiss's 1935 Texaco job, Ben Shereshaw's Cavalier and Carl Goldberg's famed Valkyrie, fr'instance. It is also quite clear how quickly the pencil-thin fuselages predominated after the cross-section rule (L2/100; where L was the fuselage length) was dropped. 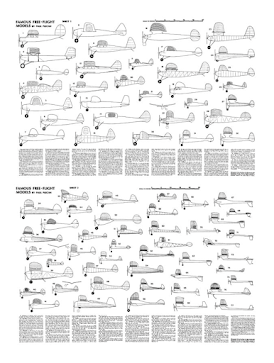 Download from the R/C Library here
Posted by Tom Ryan at 12:29 PM