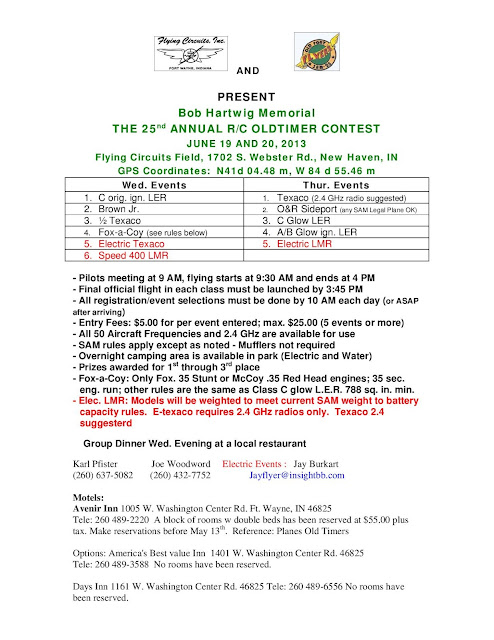 What a great flying field in New Haven, Indiana. Wind was minimal and the thermals were respectable. Some had difficulty seeing the models at altitude because of the blue sky with very little cloud cover. Today's events were: C ignition, Brown Jr., 1/2A Texaco, Foxacoy, Electric Texaco and Speed 400. Many thanks to The Flying Circuits and Karl Pfister for hosting a great contest. Thirty-four contestants flew today. We hope tomorrow will be as good!

Thanks for sending this on to me....frankly I am slightly bewildered with this " blog" thingee. I have a Class A size wedge now---(published by
M A N)Radio controlled and it flies extremely well. Powered with a rotary electric motor w/rudder & Elevator. My son in law now has it & flies it regularly. Regarding the CG location approx 40 percent from leading edge always worked on ALL sizes. I would guess that the plane  mentioned that does not  glide  well has too much POSITIVE on the elevator. In fact, the RC version I tell about has the electric battery in the fuse behind the motor and in front of the wing......flies well under power and glides well also.  keep me in the loop......

Sent from my iPad-

Sorry to have bewildered you with the blog.   It started out as a way for me to organize my emails and links.   It has grown to the point where it is watched by thousands around the world.
Your analysis is correct and when it was finally balanced at 40%, it flew beautifully.   It climbs straight ahead with alacrity.  You barely have to touch the sticks.   The glide isn't the best.  It may be hard to beat a NACA 6409 airfoil, but it needs more wing to soar like the really competitive designs.  I wonder how the other sizes would do.  The B might be a candidate for the O&R 23 event.   Still, it brings a smile to everyone's face.  One observer said, "It looks so Art Deco up there!"
Posted by Tom Ryan at 6:53 PM