I thought parklite yellow would be better than white for the front of the fuselage. We need to put crosses on the fin and the cross bones and skull on the fuselage.  I may put some red lighting bolts on the yellow. Should have it completed by Monday. 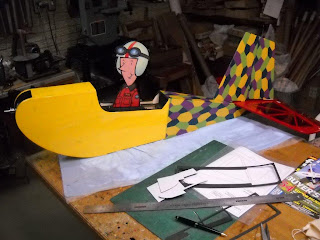 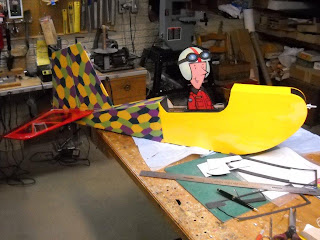 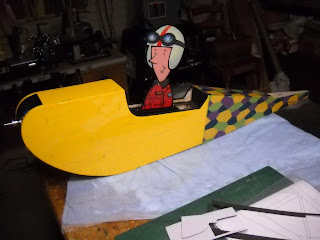 A backorder on the fuselage covering had slowed this project, but it was finally delivered Wednesday.  Horizon Hobby said they got a lot of complaints about their new covering  and I know why.  They advertised one meter of covering and they showed the pattern. It arrived in a box that was 10X10X10. Inside, were two very short tubes with no instructions. When I opened the tubes up, I found that it was cut into short lengths of varying shapes. They were getting the complaints because people were buying what they thought was the only available iron on plastic covering in the lozenge camouflage and then finding that this was made for a specific ARF. Apparently ARFers can't cut their own pieces out of a roll. Anyhow, we made the best of this. In my "research" I have found that it was common to use this camo in sections and then use some other bold colors for the remainder.

A little ostentatious, but when asked about it by German high command Richthofen said: "We are German warriors, not drab English sparrows." (nor parakeets?) We think Fritz would agree.  In any event, they said it adheres at 200° and shrinks at 300°