The contest date was August 6, 1939. The place, chosen by Bernard McFadden, publisher and patron of aeromodelling: Aviation Golf Course, Bendex, NJ .The event: "The 1939 Wakefield International Cup" contest, of course! But the original contest site that was chosen by the American Wakefield Cup Committee, the Bendix Airport, was rejected by the attending SMAE officials as unsuitable for the Wakefield Cup Contest! "On arrival at the proposed flying ground it was immediately seen this was far from ideal, and an inspection of the spot allocated for the contest proved this to be quite impossible as it was sandwiched between a dense wood and the airship hangar." The only alternative was the Golf Course. The weather was "boiling hot" according to the English Team Member Norman Lees, but perfect until noon. There was no wind, and there were thermals everywhere!
Korda's Wakefield had just the right climb, not too slow and long, nor too steep and fast, it just climbed out. And got very, very high. After 60 seconds on the propeller, Korda's Wakefield leveled out at 300+ feet, the propeller folded back, and it went into an exceptional glide pattern, indicative of a perfectly trimmed airplane. Losing imperceptible height, Korda's Wakefield drifted toward the bottom of the Golf Course where, now at an altitude of about 200 feet, it was taken gently by a thermal. "Within a few minutes it was over a thousand feet, and soaring up with each turn." According to Leonard Stott of Team GB "Ten minutes passed as many eyes watched, and Korda's Wakefield was now at about 1,500 feet altitude!" Up there it circled, minute, after minute, now the Wakefield itself was looking down at the point from which it had taken off. Then it drifted down course again, past the end of the field, slowly gliding downward, and finally, landing! The official time for that flight was 43 minutes 29 seconds. Richard Korda made two other flights that extraordinary day, for an average time of 15 minutes 50 seconds. Was Korda's Wakefield an exceptional aeromodel? Yes it was, and still is to this day. It's only drawback was that it was so common! It was the standard cabin model of the "Cleveland Balsa Butchers", everyone in the club made them. Chester Lanzo and Richard Korda perfected the genre. Korda used a much knotted "T-56" brown rubber motor, 47 inches long, consisting of 18 strands of 3/16", cranked in 1200 winds to turn a 18 inch diameter single bladed propeller on the winning flight. Korda remarked that his Wakefield flew better under "reduced" power. 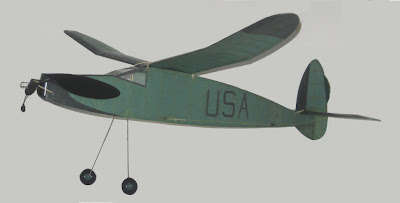 Hi Thomas, here is a picture of my Korda Wake all cleaned up by Sergio Montes. Cheers, Karl Gies
I originally built the model while teaching school at Butte, Montana in 1968. I had known about this model since I was a kid but in 1966 I was showing the movie, “The Long Flight” a fictionalized drama about Dick Korda helping a kid to get his model to fly to my junior high model airplane class. There are are some terrific scenes of the 1939 Korda Wakefield in flight. I knew after watching the movie that building this movies was an absolute must.
Every time I fly this model I stand in my transmogrifier at launch and am transported back to August 6, 1939 at the world Wakefield Championships. I literally become Dick Korda. At the SAM Champs in 1995 at Colorado Springs they had a 1939 Korda Wakefield Mass Launch Event. At that contest I was using a new motor made up of FAI Tan. Previous to that I was still using the motors I made up in 1968 and this rubber was not nearly as powerful as the FAI Tan. I had tested the model with the new motor but not at full torque and this proved disastrous. The model took off and after a short climb looped into the ground.
I saved the model as it was repairable and after seventeen years have repaired it. The model when originally built was done in the exact same color scheme that Korda used and I even did the bamboo wing and stab tips. This black and green color scheme was inspired by the the Half A Wake kit that Easy Built models came out with recently. To view this fine kit goto:  http://www.easybuiltmodels.com/pd12.htm
To read more about the 1939 event goto: http://freeflight.org/Community/ClubNewsletters/2010/PMAC10-8.pdf and scroll down towards the bottom of the newletter. Also goto: http://www.btinternet.com/~kaynes/Wakebook/ch13.htm
My model less rubber weights 6.89 ounces. I will power it with twenty-four strands of Tan Super Sport that I bought last year and this is real hot rubber.
Posted by Tom Ryan at 10:16 PM