Electric Cloudster 900 Project
After the Cloudster 900 dried overnight in the jig set up, the four 4-40 screws were unscrewed and the stab removed. This left the two 1/16" plywood mounting plates firmly glued in place on the fuselage and exactly aligned with the mounting holes in the stab itself as shown below. 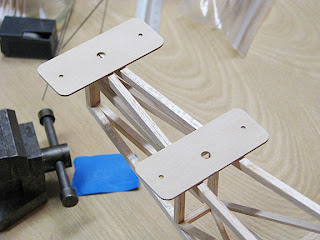 The fin was slipped down into the stab slot and secured with the two 2-56 Cap screws. Then the stab was again attached to the fuselage with the four 4-40 Allen head screws and the rudder attached with its hinge pin so you can see how the vertical tail looks on the fuselage below. 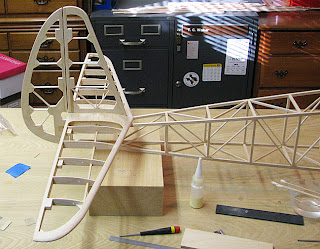