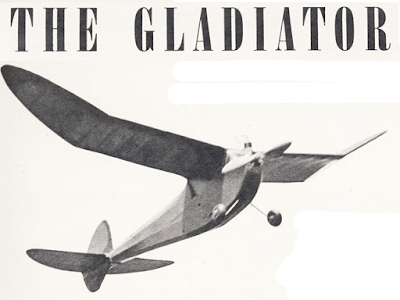 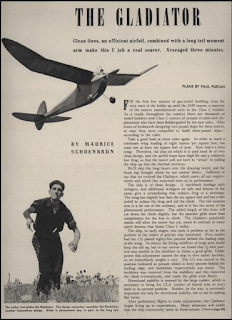 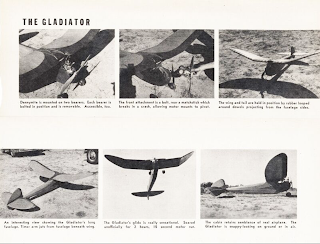 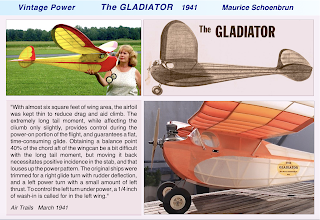 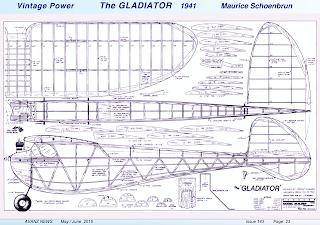 Is this your model?  (upper left) I'm confused by the three types listed on the SAM website.
Did it fly well?

Yes it is--This is the type 1 (one) wing--That makes it rare--When the article was published in the magazine, it showed a picture of the model being hand launched--It had a type 1 wing--When everybody ordered in the plans it showed the type 2 (two) wing--Boooooo hissssss!!--I got the type 1 wing plans from John Pone and they were a disaster--Totally out of square, tapered, and different lengths on each side etc etc--I redrew the plans and went that way--There were no dihedral angles or dimensions anywhere to be found so I used Playboy Sr angles--Who is to say it's wrong--The originals don't exist--Pond also included a set of rib templates, (very bad) which I figured to be the standard 6409 shape--The type 1 wing is longer than the type 2 wing and has more area--If you intend to build one go to great pains to build the after end of the fuse and tail feathers light--It's an awful short nose--I flew mine with several different engines in it from a Hornet to an O&R 60--I believe the original had a Dennymite--My favorite combination was with a Super Cyke on ignition, gas and oil with a Rev Up 12x5 prop--With an Anderson 65 it was potent--With the very long tail moment arm it doesn't stand on it's tail but is still very fast climbing--The glide is a beautiful floating one--I kept incidence at 1 1/4 degrees and CG at about 74%--It has a big stab--Mine came in a 8.1 oz per square with the Super Cyke, Hitec 555 receiver, Hitec 81 servos and 650 ma batteries--I use 350 ma telephone batteries for ignition--I hope this helps you                                                       ......Hank

Years ago, I built a full size Ehling Request for class A chosen based on how well my dad's .020 replica flew.

I discovered that a lot of liberties had been taken with the .020 version compared to the Air Trails drawing.  But when I got the Klarich kit with the Pond plan things were even worse. It had a 44" (left side tapered!) and a 22" stab.   The AT article indicated it would be 11"
Tom

All this seems to be quite standard--All screwed up--Interesting about your dad's 020 version--I built one back in the 70s with a pee wee on the nose with a coil of fuel tubing for an engine run timer--I had tons of fun flying that on dead calm summer evenings--Another model of that series that was a blast to fly was the 020 version of the Brooklyn Dodger----Again a pee wee on the nose--I had it trimmed out to fly right/right and caught it in my hands many many times on dead calm summer evenings--I was living up in NJ back then and there was still room to fly FF--I started flying RC in 1952 because it was  new experience--I actually built my first model that flew in 1943, and my first gas model that flew in 1948--A Buccaneer "B" Special with an O&R 23--Lots of room for FF--Now I don't know of anywhere you can fly FF here in Maryland so FF is over for me  .....Hank Baer
AMA L50 SAM L81