The Wedgy is very hard to hand glide and grab the transmitter to control the glide.

With the CG at 40 percent it drove straight into the ground, like I just held it by the tail and dropped it. With full up trim it did not make a difference.

Moved the battery back under the wing where it had a CG of 67 percent. With full up trim I was able to make a steep control glide to the ground.

I am going to make a battery box holder at the rear of the wing. Right now I am pretty beat from going up and down to the basement to make changes in the battery location.

I built the rear of the fuselage to match the plans twice so the stab location is as the plans show it. If it still wants to dive with the rearward location of the battery I will start raising the trailing edge of the stab.

The nose wheel sure takes a beating. It saved the model from some serious damage.

I also have to make a needle valve extension.


Hope to get the Wedgy to glide correctly by the time you are able to pick it up. I will also try to run the engine. 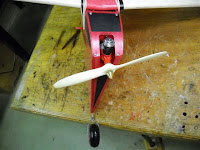 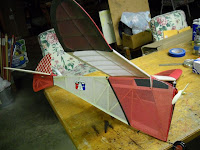 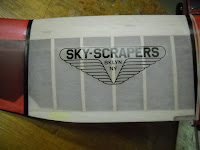 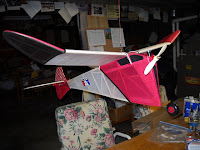 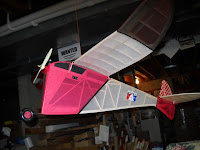 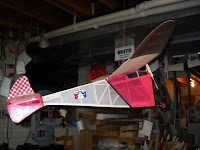 I liked your Wedgy a lot. I intend to build one very soon as a Texaco model. Can you plase inform me what is the wingspan of your model?

It's too small and not old enough for Texaco. For 1/2A Texaco, it's fine. [42 inches/275sq"] This one climbs straight as an arrow and you can leave the transmitter on the ground.